Six Remarkable Places You Need To Visit In Yousmarg

Navigate the trail of these famous must-see places in Yousmarg

Yusmarg comes under the unexplored part of Kashmir. In the Budgam district of Jammu & Kashmir lies Yousmarg, a pristine meadow at some odd distance of 50 km from Srinagar. Steeped in religious and spiritual significance, the Meadow of Jesus – as it is otherwise known – is surrounded by snow-capped hills, and it is said that the peace & serenity of the place is palpable.

At first, the far-stretched greenery and serenity will bring the long-lost Natural peace you have been craving for so long. And then you will be transported to a world of digital detox – a disconnect from the outer world in the true sense. With no connection and more time to yourself, it is natural you would want to stroll the flower-lined paths and explore the fascinating spots you would miss experiencing if not for coming down to this picturesque valley.

DudhGanga is a challenging yet rewarding experience for trekkers. Trekking to reach Dudhganga means going through the dense forests of Lidder Mud and Bargah, arriving at Tru Sar lakes (Three alpine lakes) before making it to the river milky in colour, thus the name DudhGanga. Trekkers can camp their stay here or go trout fishing. Camping is a must if you want to wait a day and explore more majestic mountain places such as Sunset Peak and Tatakutti peak.

Sang-e-Safed Valley, aka. The White Rock Valley is a well-liked location for trekkers and adventure enthusiasts due to its spectacular white rock formations. The site is famous for being the base camp to reach the highest peak of Tatakutti and other adjacent locations such as DudhGanga and Sunset peak. It is best to trek with an expert guide who can show you the best route and assist you in navigating the Sang-e-Safed Valley because it is a remote and unexplored location.

With an elevation of 4,760 metres, Tatakutti peak in the Budgam district of Jammu & Kashmir is the highest peak in Kashmir’s Pir Panjal Range. You can get a vista from the summit of other peaks such as Nanga Parbat, Kolahoi, Harmukh, Nun Kun, Sirbal, etc. The expedition starts from Dudhganga, at an altitude of 2700 metres and will take you through Valleys such as Diskal to Ashtar. Besides trekking, you will be camping to reach the peak.

Suggested Read: Five Secrets of Kashmir No One Will Tell You

Charar-e-Sharief shrine, dedicated to the Sufi Saint Sheikh Noor-ud-Din Noorani, holds historical and religious significance. It is one of the most significant sacred locations and is well-known for its yearly Urs – a religious celebration commemorating Sheikh Noor-ud-Din Noorani’s passing. During the Urs, the town is decked out in lights and flags, and tens of thousands of followers arrive to worship and take part in the festivities.

In addition to being a meadow, Tosa Maidan is well renowned for its historical significance. It is surrounded by tall trees and situated in the Himalayan Mountains, about 10 kilometres from Khag. Shepherds from other adjacent nations are said to have once visited Tosa Maidan, one of the pastures. The Mughals once travelled to Poonch via this route. After travelling through the upper mountain districts of Drang, Zakhora, and other minor communities, one comes to Tosa Maidan’s meadow.

The holy mausoleum of the Pakherpora Shrine is a historical and religious monument. It is one of the most significant shrines in the state and is devoted to the Sufi Saint Mir Sayyid Ali Hamadani. Thousands of worshippers travel across the region to the shrine, which the locals revere. The temple is renowned for its delicate calligraphy, beautiful tile work, and intricate wooden carvings. In addition to praying at the shrine, visitors can meander through the lovely garden surrounding it. 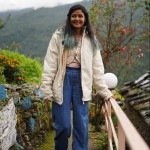 A travel lover and moody chef, Surbhi loves to read & write and doodle in her free time. For her, being able to write is a blessing, and to keep at it—a work-in-progress. When not working, you can find her swimming her worries away, dancing to the beats, or filling up her bucket list to tick them off.