Come and explore spiritual enlightenment in the land of Rishis.

Kashmir has always served as the spiritual realm’s epicentre. Rishis, Saints, Awliyas, and Peers have always been present, to bless this wonderful land. Kashmiriyat is a cultural manifestation that runs through the roots of the valley’s cultural ethos. It is the culmination of Buddhism, Jainism, Hinduism, and Islam. The people of the Kashmir Valley are more connected to the spiritual aspect of this area because of their humility, warmth, empathy, and fraternity. Keep reading to discover more about Kashmir’s top seven spiritual destinations.

This shrine is situated beneath a magnificent Mughal fort sprawled out on the slope at the base of Hari Parbat. Regardless of religion, the shrine’s beauty certainly enchants visitors and draws a lot of followers. The shrine is named after Hazrat Sultan, a member of the Syed family who originated in the Kashmiri village of Tujar-Shareef. Hazrat Sultan possessed divine abilities. People hold the belief that no one leaves the shrine empty-handed. This two-story mosque is a striking building with numerous pillars, a tall connecting fake ceiling, and conical domes. The mosque’s architecture is a remarkable illustration of the Mughal style.

A 200-year-old shrine called Dastgeer Sahib is located in Khaniyar. Despite the fact that Sheikh Syed Abdul Qadir Jelani never stayed there, it was constructed in his honour. Khwaja Sanaullah Shawl built it in 1806 and extended it in 1877. It is flanked by a sizable market and serves as Khaniyar’s central activity hub. This sacred location has an intriguing architectural significance because all of the wood is linked together using interlocks rather than nails. The interior is embellished with incredibly detailed paper mache artwork.

Charar-i-Sharief is considered one of the holiest Muslim sites in Kashmir. It is located about 30 kilometres from Srinagar on the way to Yusmarg. This wooden shrine was built in honour of the Sufi saint, Sheikh Noor-Ud-Din Noorani. Sheikh Noor-ud-Din Noorani, also known as “Alamdar-e-Kashmir,” was a Kashmiri Sufi saint, mystic, poet, and Islamic preacher known as “Sheikh Noor-ud-Din Noorani.” Nund Reshi was one of the founders of the Rishi order, a regional Sufi sect. Many spiritual instructors and saints were affected by him, including Sheikh Hamza Makhdoom.

A prominent place in Rainawari houses this temple dedicated to Guru Shankaracharya. The temple complex is located at the foot of Shankaracharya Hill & offers a serene, deep, and peaceful environment. A holy spring known as Durga Nag is in this temple. A temple was built in honour of Shri Guru Shankaracharya after he visited the site. Despite its small size, some fascinating historical and theological stories are associated with it.

Martand Sun Temple is an ancient Hindu temple located in the Kashmir Valley near Anantnag. It was built in the eighth century AD and was dedicated to Surya, Hinduism’s primary solar deity; Surya is also known by the Sanskrit-language synonym Martand and Martanda. The Martand temple was built on a higher elevation that overlooks the entire Kashmir Valley. It was a unique skill of Kashmiri architecture that integrated Gandharan, Gupta, and Chinese art forms, according to the ruins and accompanying archaeological findings. 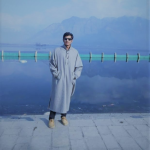 Mujtaba Hussain is a poet, writer and analyst. He loves to research different things. Travelling is his passion, and he is in quest of learning something about everything.